It is common knowledge that one should delay realizing their capital gains as much as possible (especially when aiming for Financial Independence / Early Retirement). Let’s focus on the phase, when one saves for FIRE, and see the magnitude of the effect of such a delay.

Everyone has their own unique situation. This post is based on a number of assumptions, thus, don’t rely on it as is. Have a look at the assumption and see how well this applies to your situation.

It is commonly known that usually one should delay realizing their investment capital gains as much as possible to increase their returns. Basically, instead of just paying the tax now, one can temporarily keep it and continue getting investment growth (compounding) out of it.

Let’s take an example of Annet. We will use the following assumptions about Annet and her life:

Now we compare 2 options. The first option is delaying realizing capital gains as much as possible. Basically she never sells until becoming FIRE. At that point, she will pay 26.375% on her capital gains. The second option is realizing capital gains as fast as possible (every month, alternatively having only distributing ETFs). Basically, once her 1000 grow into 1003.27, she immediately sells them (or receives dividends) and buys the same asset again. While doing this, she pays 26.375% tax on the growth.

Note: This is just a simplified model. Re-buying the same asset might be considered a wash sale.

Also normally one does not sell everything after becoming FIRE, but here we assume this to be able to compare the two approaches.

I’ve prepared a Google Spreadsheet with the calculation. You can play with it by making a copy first.

Above we considered only one particular setting. Now let’s have a look how the two cases differ under various yearly investment returns and time horizons. 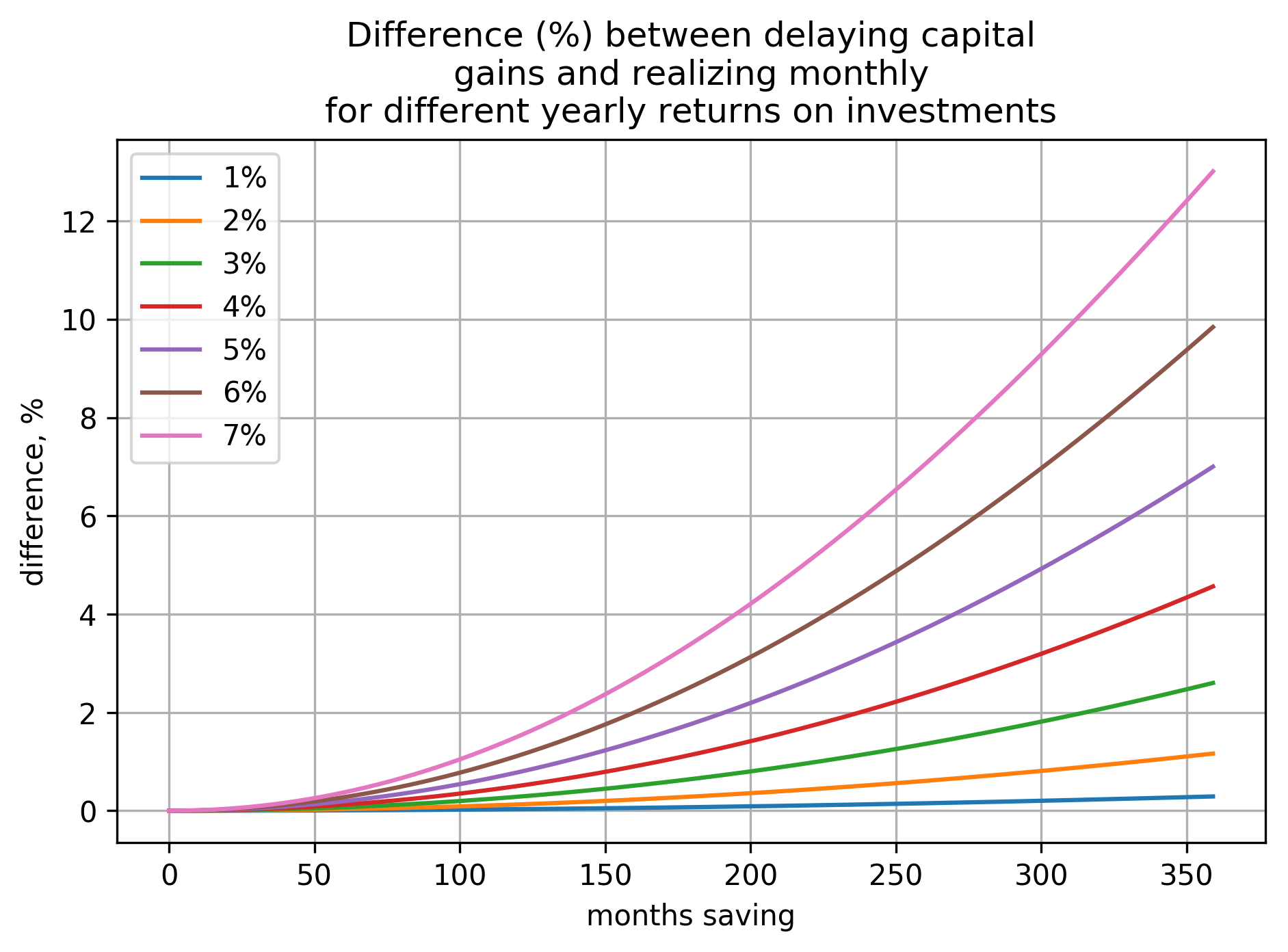 As we can see, for 7% yearly return and 30 years, the difference crosses 12%, which is a substantial amount.

Possible improvements of the simulation:

I will address some of these in my follow-up posts, stay tuned!

Delaying your capital gains matters less than I expected (1.7% difference under 50% saving rate and 4% yearly return case). However, since by default you don’t realize them, it is better not to do anything extra and just don’t lose these 1.7%. Overall, 1.7% (or even more if the yearly return is larger than 4%) can be a reasonable sum.

Occasionally one can be forced to realize their capital gains (e.g. an accumulating ETFs gets closed or changes its internal structure). Based on the numbers above, it makes sense to try to avoid this to some extent (e.g. buying same ETFs from different providers).