With the bull market continuing, more and more people “predict” the crisis. Obviously, there is a temptation to try to time the market. Let’s try to estimate the best outcome of timing the market by considering the 2008 crisis. Perhaps it is not worth it at all (spoiler: the returns of ideal timing are actually substantial).

Before simulating anything, we need the data. First, I arbitrarily select the following companies to analyze:

You can get the same data by inserting the ticker in

First, we consider buy&hold outcome, i.e. one buys on 3rd of Jan 2006 and then sells on 3rd of Jan 2013. When buying we take “high” price of the day and when selling - “low”. This gives us baseline to compare to. I.e. if one does not time the market, this is their return.

Second, let’s consider an investor who times the market, but only once. In other words they buy on 3rd of Jan 2006. Then at some point during the crisis they sell. Then eventually they rebuy. Finally, they sell again on 3rd of Jan 2013. Let’s enumerate all possibilities to sell and rebuy and find the best ones.

When timing the market, I also take “high” price of the day for buying and “low” for selling. This gives lower bound. 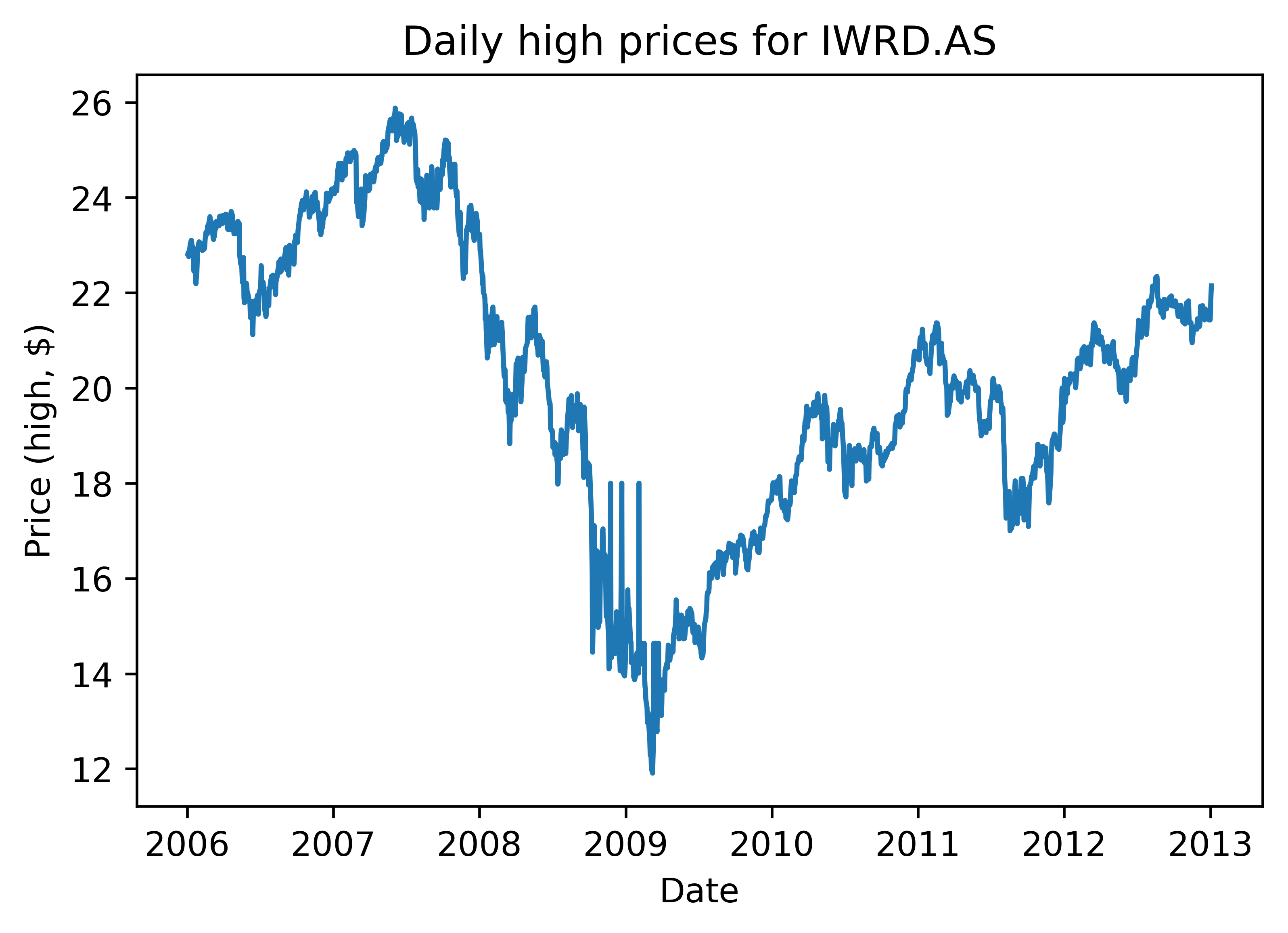 As we can see, the fall has started in 2007 and the recovery in 2009. It is peculiar to observe how many times it grew during the crisis and then felt back again. Timing that wouldn’t be fun.

One can definitely see that figuring out when to rebuy in practice wouldn’t be easy at all. There are plenty of small recoveries before the actual minimum of 2009.

This may be confusing to read, but please bear with me. Let’s say you sell in 2007. This corresponds to horizontal line at 2007 (i.e. pick 2007 on the vertical axes). Then let’s say you rebuy in 2012. This means that you pick 2012 on horizontal axes. Your ROI is the intersection of the two. I.e. this plot represents all possible ways to time the market and their outcomes. As we can see, rebuying around 2009 is generally better than others and selling around 2009 was a bad idea. Also if you misstimed the market, you would reach ~-40% ROI.

Please note that I interpolate the missing days (e.g. holidays) by taking average of neighbors. This just fills the holes in the graph, otherwise it is impossible to read (and if you don’t believe me here is an example).

As we can see, timing the market through World Index in the best case would be very profitable (one could have 107.26% after 7 years instead of -3.5%). However, it is definitely not easy. When looking at all possible timing scenarios there is a lot of blue-purple (which is 0 or negative return). Another problem is that there are plenty of smaller drops and recoveries during the crisis.

As we can see the “hot” area is much-much smaller than before.

You know the drill now, so I will just add the numbers and graphs without too many words.

I am surprised how small buy&hold returns are.

Oh, the buy&hold return is scary and rebuying at 3$ per share is very peculiar.

This one looks surprisingly easy to time (probably, because the timing does not bring that much return anyway).

I am now curious to estimate how hard it was to time the market. In the follow-up post I want to consider how badly could one time the market and still make reasonable profit. Also it makes sense to color all timing scenarios based on whether they outperform buy&hold.