Quite some time ago I stumbled upon a tweet just saying “get in the zone, then refuse to leave”. Despite the simplicity of the advice and complete absence of any proof, this has a profound positive effect on my productivity. Let’s see what this means for me and why I think this works so well.

At some point I completely by accident stumbled upon the following tweet: 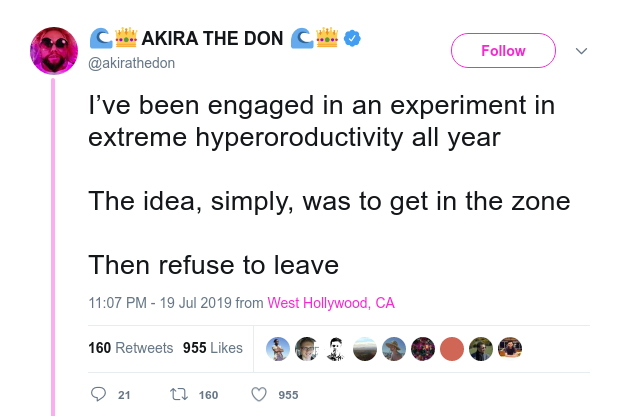 Obviously I don’t do everything people say to do in their tweets, but in this case the advice just struck me and I did try it almost immediately. And it worked like a charm. The tweet itself has a longer thread with more explanations. Basically the author has been doing this for 200 days already. They get into the flow and then just try to stay there as long as they need.

How this works for me

Sometimes I preplan a list of tasks, like creating a playlist, but with work. Then I start doing the first task in the list. Sometimes this can be hard (I can feel tired, not interested). Often this can be a very small task (10-20 minutes). I also turn on my time tracking. Very soon I finish the task and completely forget that I was tired or not interested. The time has just likely passed like a lightning. And when finishing a task I use the advice from that tweet. Instead of just turning off the time tracking and marking the task as done, I start to track time for the next task. Then I quickly mark the previous task as done (the new task is being tracked already, so I need to hurry up). Then I literally jump into the new task with no hesitation.

It is peculiar that sometimes I have literally no clue how to solve the new task before I actually get to it. E.g. writing a blog post without having a particular inspiration. If I didn’t try to stay in the zone, it would be very easy to get scared. I would stop, think that I have no clue what to write and just get distracted with something unproductive. Instead I just jump into it ASAP. My brain seems to be doing something like “oh, we are in trouble, I need to quickly come up with some idea, ok, to mitigate this unpleasant situation of being time tracked and having no clue what to do, I could <some surprising idea>”. E.g. for blog posts I just quickly go through my list of topics I could write about and take the first one which resonates with me. It is also peculiar that without staying in the zone I would hesitate which one to take and would go through the list for much longer with plenty of doubt and multiple equally good options to choose from.

Occasionally I am able to do this for multiple hours, which was very surprising. Before I would struggle very badly and make a lot of breaks. I would also feel quite tired, but once in the zone, I definitely don’t feel this anymore.

I have to warn you - there will be a bunch of speculation ahead.

My main hypothesis is that starting doing something is hard. E.g. it is evening and I know that I would love to do a couple of tasks, but I still have some free time. So I could probably read something pointless somewhere in the Internet for couple minutes before I start working and be just fine. Or I am tired. I could go directly to bed. You see, a stuff like this could prevent me from happily jumping into executing the tasks I need.

My old approach didn’t take this into account at all, thus, didn’t work that well either. Basically after completing a task I would make a couple minute break. Yeah, that’s what people usually do - they do something and then they rest / have fun. The problem is that I would get distracted and these 2 minutes easily become 10 or even hours. In the end I get to the square 1 - I need to start again from this unproductive state with all the questions arising again (I am tired, should I go to sleep, I already did this one task, I should be fine).

When I stay in the flow, I just avoid all of this. The flow functions as a momentum to get me through task switch. Instead of thinking much how I feel and whether I am tired, I just start another task. By the way, flow feels amazing and once I am in the flow it is much easier to achieve it in the next task (even if it would be impossible to do with that task on its own).

This approach also encourages one to batch their work better, i.e. to gather similar tasks into series and do them in one go. E.g. if I write a blog post, I can then write a second one just because I felt in the mood and was already warmed up for writing. This saves me from ramping up for writing some other day and, thus, improves my productivity. The author of the tweet also mentions batching.

Just jumping to a task helps to fight perfectionism and analysis-paralysis. It is easy to start reflecting before doing a task that e.g. I don’t know what to do or there are multiple options, which are extremely hard to evaluate. When staying in the flow and starting a task I have no time whatsoever for this. The time tracking is already on, I already need to start doing something. Obviously this may lower my quality bar (“let’s just do something”), but I haven’t seen this being a problem. Instead I get reasonable results while avoiding perfectionism and over-analysing.

I suggest you to try this approach. I understand that we are all different and the advice above may be life-changing for me, but completely useless for someone else. Only you know how it is for you. Naturally I still occasionally feel not that well and don’t even start with any tasks at all. Or I do get distracted before starting. The advice is not a silver bullet, but still it has improved my productivity a lot and I do feel happier, because I stay in the flow much more.

Happy staying in the zone & being hyperproductive! Thank you, @akirathedon, for your tweet with such amazing advice!