Slowly (but steadily) going through the Sapolsky’s course. Lecture 7.

Another example similar to the domesticated Siberian foxes case is metro dogs in Russia. They are effectively selected for avoiding humans, being in packs and aggressive temperament. As a result, they start looking like wolves very fast (e.g. tail shape). This appearance is not needed for their survival, but it comes as one genetic package.

Modern version of behavioral genetics tries to find a gene for something. In the classic version, a phenotype was considered and then individual genes were compared in individuals, which have different phenotype trait (e.g. eye color), i.e. something external. Alternatively one can look at proteins and how they function (i.e. an intermediate step between genes and traits). Finally one can investigate differences of protein sizes (without knowing the precise function). However, this works only in “simpler” cases, like looking for a gene for a specific disease like PKU, cystic fibrosis (but not TV taste). Now find a family where approximately half has the disease. Find a segment of DNA which everyone with the disease has, but no one without. This usually gives you a stretch of DNA consisting of 10-30 genes. Somewhere in this sequence there is “the gene”.

Another approach is to start from a gene and to study it across species. E.g. you have 2 different versions of a gene and try to see differences in behavior, protein function or size.

Issue - this way you look only where “the light is shining”.

However, all of these explain only a small portion of overall variability.

All such studies result in some statement like “this trait has 53% heritability”. The meaning of this is often misunderstood.

Another example - imagine a plant with 3 versions of a gene (A, B and C) defining how well it retains water. There is a difference of this trait across A, B and C (i.e. this gene has good predictive power). At the same time environment affects it much more, thus, heritability is actually low. 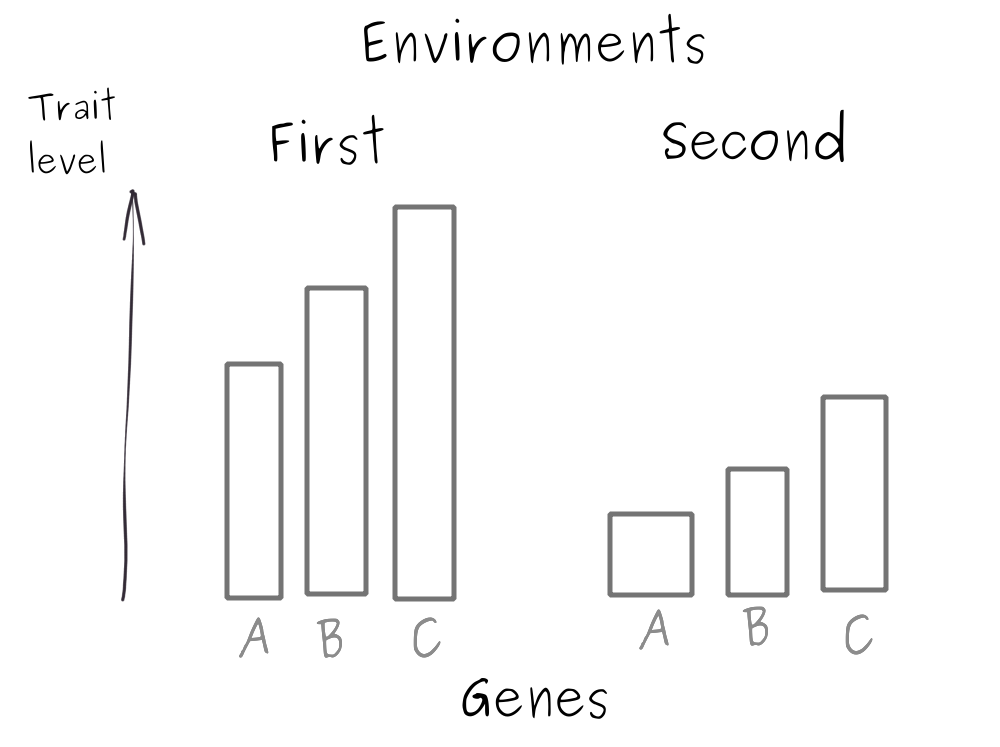 If you happen to study only one environment, it will look like genes are much more important than they actually are. Unfortunately, that’s how science mostly works (take one species like some dessert rat and study it, i.e. control for environment). This removes ability to see the role of environment.

Random peculiar fact - how to measure protein size - put them somewhere where they move as a function of their size and measure difference in position (e.g. sinking in a gel).

In other words, if you had to predict trait level - would you choose environment or genes?

Humans inhabit a lot of environments. There are gene-environment interactions, which can change gene effect.

Studying only one environment inflates heritability.

Examples where environment plays crucial role in the outcome:

Single genes define a lot for flies. Even when you see a gene for X, is it just an indirect effect (like height causing being an extrovert)?