Today I stumbled upon a tweet about an SMS which was sent before Valentine’s day, but was delivered only recently (i.e. 9 months later). This made me think about the impact of technology on our lives. Let’s look more into what has happened and my thoughts as well as speculations about the reasons for such a delay. 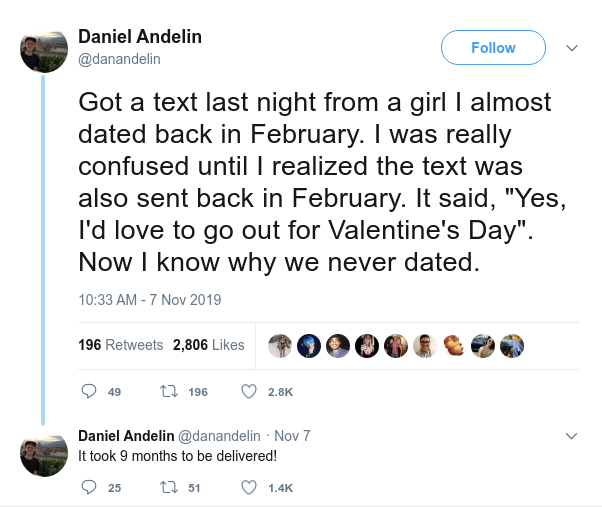 To my surprise, I noticed in the thread that there are journalists eager to reach the author and wondering whether the two are going to reconnect. There were also plenty of news articles (e.g. The Verge, popularmechanics.com).

There were multiple tweets from other people about similarly delayed SMS. Someone complained about their boss receiving an SMS from them at 4am. Some claimed that they didn’t send these messages at all (it is easy to forget an SMS after 9 months). For some this was a sad experience, since they received a message from people, who died in the meantime.

So far The Verge seems to provide the most technical details:

A company named Syniverse, which provides networking services, later took blame for the messages being delayed. Syniverse said a single server was at fault: that server failed on February 14th, trapping messages waiting to be sent out; the server was only brought back online on November 7th. When that happened, all of the messages were finally delivered.

Syniverse initially published a note saying that 168,149 delayed messages were sent. A spokesperson later told The Verge that the company is “still assessing the scope and volume of messages impacted by this server disruption.”

I suspect that 168k messages is an underestimation. It is hard for me to believe that 168k would create such a public outcry. On the other hand, it is super easy to write something on twitter or reddit these days, so perhaps this number was enough…

What has happened on their side

These are just my speculations. I don’t work in communications, so I have no clue how their system is setup.

I suspect that there was some server responsible for delivering such messages and around 14th of February it stopped working for some reason. It likely had some cache (presumably even on-disk), because dropping SMS messages seems bad. Perhaps it was one machine out of many (e.g. geographically distributed). Then I can see two possibilities:

I like option 1 more. It also seems to agree with the quote in The Verge. I speculate that other servers in the system just overtook the work this server had to do, that’s why no one noticed.

Then around 7th of November someone noticed this server being offline. Here I can again see 2 options:

In the case of (1), they might have discovered 168k message undelivered and then had a discussion with their manager or even the manager of their manager about what to do. However, I prefer option 2 here. I.e. this cache was delivered unintentionally. Otherwise I don’t think they would go for delivering these messages during the night and without any explanation.

Again, these are just pure speculations. Bug happens, this one was not the worst. Dropping the messages completely would probably be less fun (but on the other hand after 9 months their value is of doubt).

This can be malicious

Then I had a thought that perhaps there is some entity, which intercepts all my communication in all channels (SMS, email, messengers) and filters it. Perhaps that’s why people, who I write to, sometimes don’t reply.

Obviously, it is very easy to shoo such a thought away by just reminding myself that there is no point in doing that to me and it is quite hard in terms of resources and tricky to automate.

On the other hand, it is entertaining to imagine such a super entity controlling everyone’s communication. Basically it would decide who can say what and to whom. Like a god-like AI orchestrating our lives to maximize our happiness (or just because it can).

Again this is more like a conspiracy theory. I am pretty sure that if that was the case, someone would have noticed. E.g. they send a message to someone close by and just verify physically that it is not delivered.

A more realistic case would be parents doing this to their child. Parents definitely have preferences who their child should hand out with. Usually with people who parents like more. So it would be convenient for parents to create an illusion that other less desirable people are not even interested to communicate with their child.

Again practically pretty hard - one still communicates directly quite a lot, but in a fully digital world (i.e. no physical communication at all) - easy peasy.

Effect of technology on our lives

It was peculiar to think more about the original tweet I stumbled upon. There was a romantic relationship involved (probably at a very early stage) and due to this missing SMS, it didn’t go further. In some sense, this delayed SMS had a substantial impact on the author’s life. While I doubt that the two are ideal match for each other (just using a probabilistic argument - probability of that is low), the author would still spend time with the other person and might have attempted to build a relationship.

Here it is very easy to start falling into a fallacy, which reminds me of Butterfly effect. In some sense one could start saying that technology actually changes our life extremely. Because of computer, I sit more often than I would otherwise, my profession is based on IT. I spent numerous hours in Internet.

I claim that this is a fallacy because you can say this about anything in your life. Basically, you can consider almost any effect or detail in your life as your own “flapping of butterfy wings”. Your life might have been very different otherwise.

I suspect that one can’t just separate an impact of an individual event. The life is too interconnected these days and it has too many dimensions. This impact of something depends a lot on initial conditions. E.g. the same startup idea may work for someone who has enough resources or experience (or just lives in the more appropriate country).

I also consider such deep thinking about alternatives counterproductive. Basically one can spend plenty of time thinking what could have been different, but this does not bring any value. It is just a form of entertainment and dreaming.

Even though the author of the tweet ended up in this peculiar situation, I still think that technology is good and the author would agree with this as well. Funnily enough, for them this story might have even a net-positive effect due to journalists’ interest. This also has potential to boost the relationship with that other person (at least it is a funny story to tell other people about how you met). But even if this was negative, e.g. this message was completely lost, I would prefer losing this SMS to not having SMS at all (e.g. using paper mail or not being able to communicate via long distance at all).

It is very easy to stop appreciating the positive impact of technology on one’s life, especially since one is so deeply ingrained in it that they never see any alternative. But it is enormous. I think I could be naming examples for a very long time. I am definitely grateful for medicine (this extends life and its quality a lot), Internet and knowledge available there (a way to multiply your impact, partial equalization of opportunities independent of your initial conditions like wealth).

Happy living in this bizarre world!