I’ve noticed that consumerism makes sense if one assumes that Financial Independence is not achievable. Let’s look more into this.

Let’s take an example of Alice. She works at some job and makes some money. Let’s consider a case when she does not know about FIRE or for some reason assumes that it is not achievable (e.g. expects the stock market to stop growing). She spends some part of her salary each month and with the remaining part she is free to do whatever she wishes. It was surprising to me that in such a situation spending a large portion of the remaining money just for fun makes sense and it is even rational.

From Alice’s perspective, there are not that many options to go with her work. At some age, she will start getting a pension and stop working. Before that she needs money, so she cannot leave the job. Basically, her no-FIRE assumption leads to “I will likely work until governmental pension age”. That’s optimistic case. In the worst case she could lose her job. That’s why I said spending “large” portion of her money and not all of them. From a rational perspective, she needs some emergency savings, but they don’t have to be as aggressive as for FIRE.

Under such conditions, it makes sense to try to get the most out of free time she has left (evenings, weekends and vacation). That’s all what she has left (based on her assumptions) and she needs to maximize utility of this time, i.e. to maximize happiness. Here we unfortunately leave our so far very formal framework, because defining happiness is tricky.

Let’s consider a more concrete example. Let’s say she has X EUR left after covering all necessary expenses for this month. One option would be to invest this money and just leave them there. Another option would be to boost her happiness by somehow spending them. Here we assume that she already has a reasonable emergency fund and various insurances (disability, medical). If FIRE is not possible, investing does not make sense. The money will be just laying somewhere without positively affecting her life at all. I agree that this can be perceived as an additional buffer, but we assume that she already has a sufficient emergency fund.

Technically by investing she could spend the money later. E.g. if she exhausted all ways to boost her happiness, shew could wait to discover new ones. However, the timeline in this case is still very different from FIRE. Here it is much shorter - like the next vacation or saving for something expensive. For FIRE - it is years.

Please note that I am not saying how she should spend them. Obviously she could go 100% consumerism route and start buying a lot of expensive unneeded stuff. As “The science of wellbeing” course has pointed out (summary), this won’t help her to become happier and even can make her unhappier. She could probably pay for experiences (e.g. travel) or try to help others. However, here I just assume that there are some meaningful ways to boost her happiness with spending money and Alice has a magical box telling her these ways.

In this framework, as long as spending money boosts her happiness even a little, it is rational for her to use this opportunity and spend the money. If there are no meaningful options left, she may save the money for some short time until an opportunity arises. Anyway, she we will work until pension age and nothing can be done about this (from her perspective).

Overall visually we can represent this as: 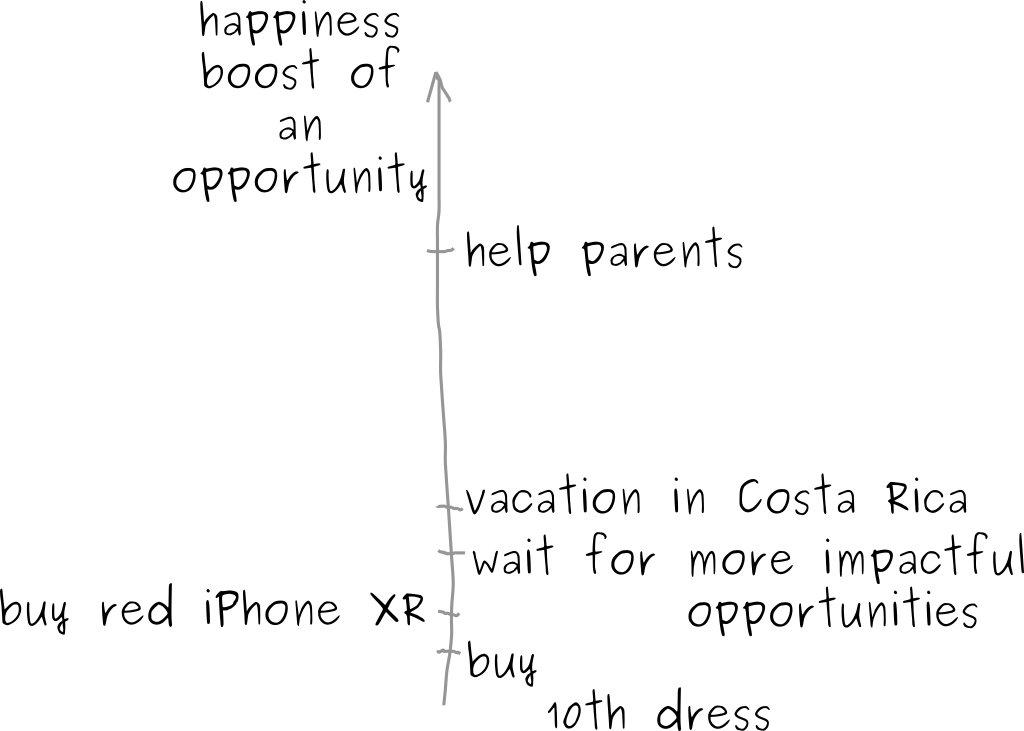 The precise values are arbitrary. How to evaluate each option is an art in itself, which we don’t even touch here. Alice just goes through the opportunity list from top to the bottom and executes them.

Now let’s imagine that Alice discovers Mr. Money Mustache blog or somehow changes her mind about FIRE. Now FIRE becomes viable for her and she may pursue it. How does this affect the framework outlined above?

Not much, FIRE is just another opportunity on her list with its own “happiness boost score”. Again it is close to impossible to estimate it well (you probably have to trust your feelings and priorities), but for simplicity we assume that Alice somehow magically can make this estimate. Thus, the framework still works the same as before, there is just one more option. 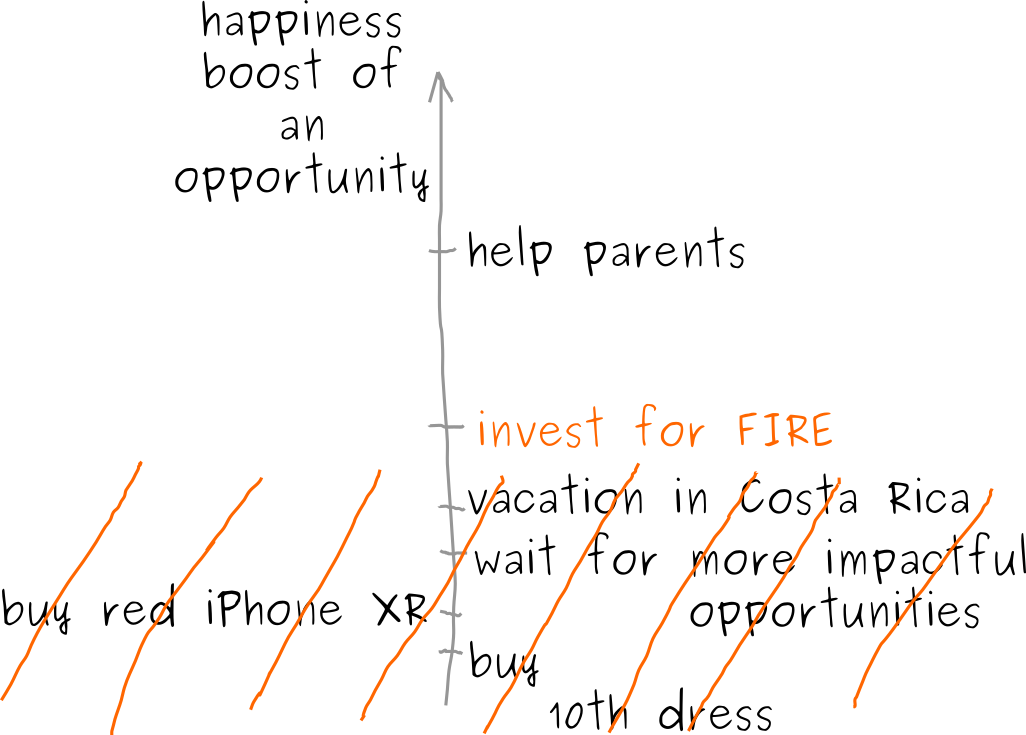 Basically there are still opportunities, in which it makes sense to spend money to boost happiness. However, at the same time there is now a new mega opportunity - saving for FIRE. It functions as a lower bound for all other opportunities - with FIRE I expect to be happy to a certain degree, thus, if I have some spare money and no better way to spend them (i.e. bringing more happiness), I should invest them for FIRE.

I feel like you are going to ask “hey, that’s all very cool, but what is the point?”. So I am going to reply in advance.

First, this is a useful exercise to understand others better. I am reading “Search Inside Yourself” these days and they talk a lot about taking other people perspective to understand them. Previously I personally was confused by people, who explicitly refused FIRE and continued their regular “shopping therapy” routines. It may the case that they just don’t find FIRE realistic - likely they have never seen anyone who reached this state, this also means going against the crowd and one becomes an outlier and in some sense a pioneer. It is also funny that I can remember the times before I discovered FIRE. I definitely felt unhappy about working for decades, but this unhappiness didn’t go anywhere. I just couldn’t find a solution, so I was slowly going into “ok, let’s at least have as much fun as I can” mode. Fortunately, I discovered FIRE and this gave me proper perspective and I abandoned that route immediately.

Second, the happiness maximization framework with a list of opportunities also works for FIRE. Are you not sure whether you should invest the money or spend them in some fancy way? Then try to answer whether it will make you that much happier. I understand that this is still a hard question, but it is a good first step.