I started taking “Fundamentals of Music Theory “ on Coursera. Summary of week 1. So far there are a lot of stuff “just by definition”, so I honestly felt a need to wrote a summary to structure everything in my head (since I already forgot quite a lot).

We can compare sounds and we call them low and high. Some sounds we can’t sing. For the ones we can, we say they have pitch.

One can write relative changes in pitch, but this is still ambiguous for a reader, if they don’t know any absolute value. Thus, monks struggled with writing down and transmitting melodies. As a result, stave notation was born.

Stave is based on 5 horizontal lines. A symbol on the left is called G-clef or Treble-clef. It circles itself on line representing note G. Each line and space between lines represent a note (a white key on piano keyboard). 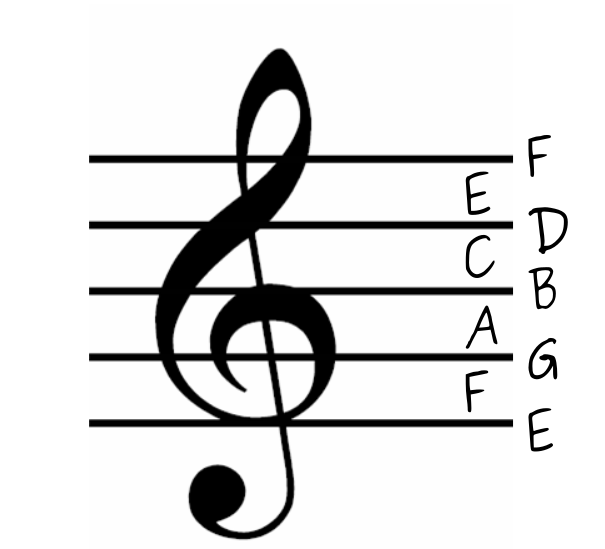 One can add additional lines when leaving stave’s range. E.g. middle C is the first line under the stave.

However, we have 12 pitches on guitar (i.e. also black keys on piano keyboard) in one octave. 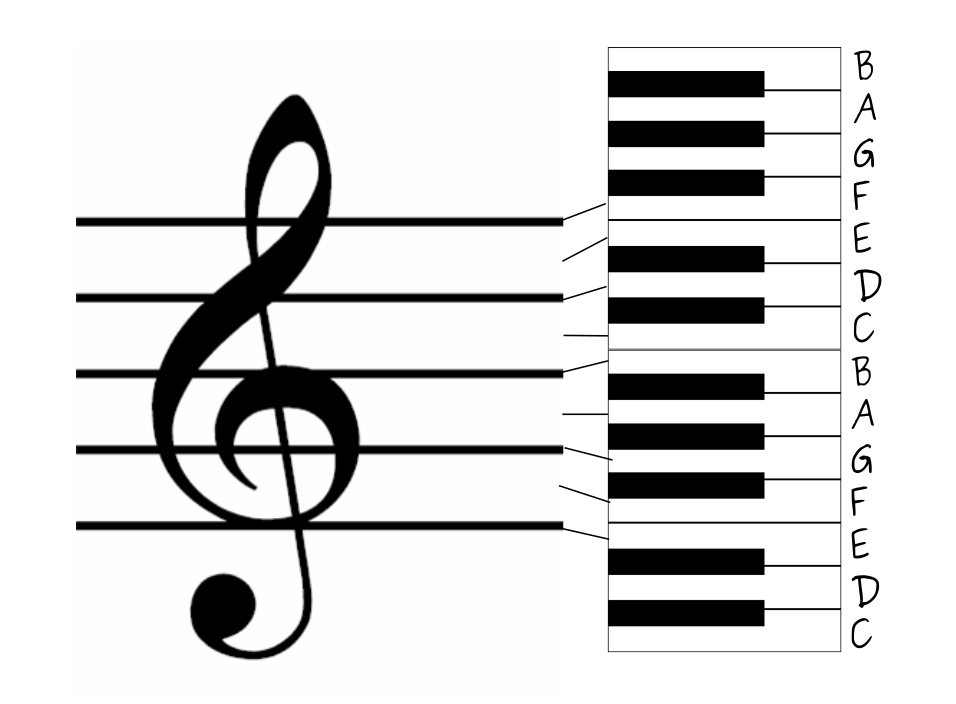 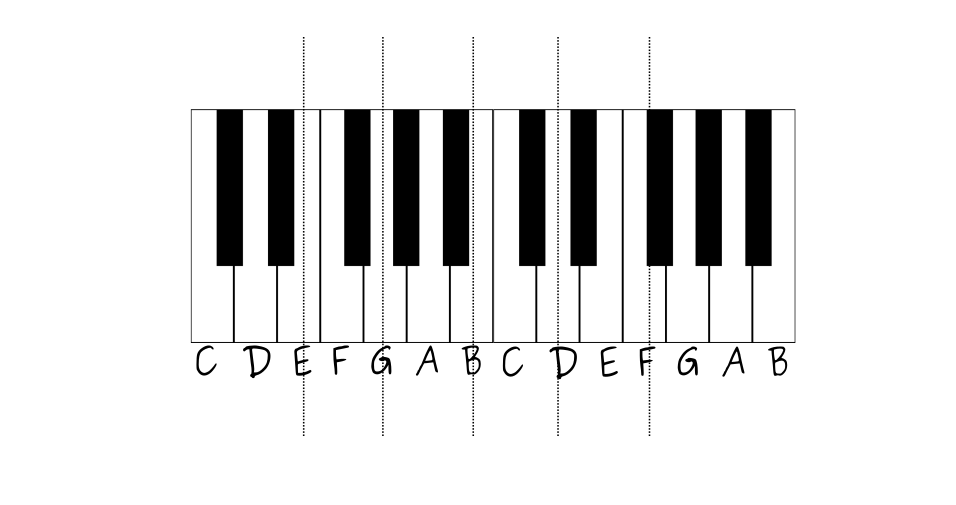 Octave - interval between (and including) two notes, one having twice or half the vibration frequency of the other. 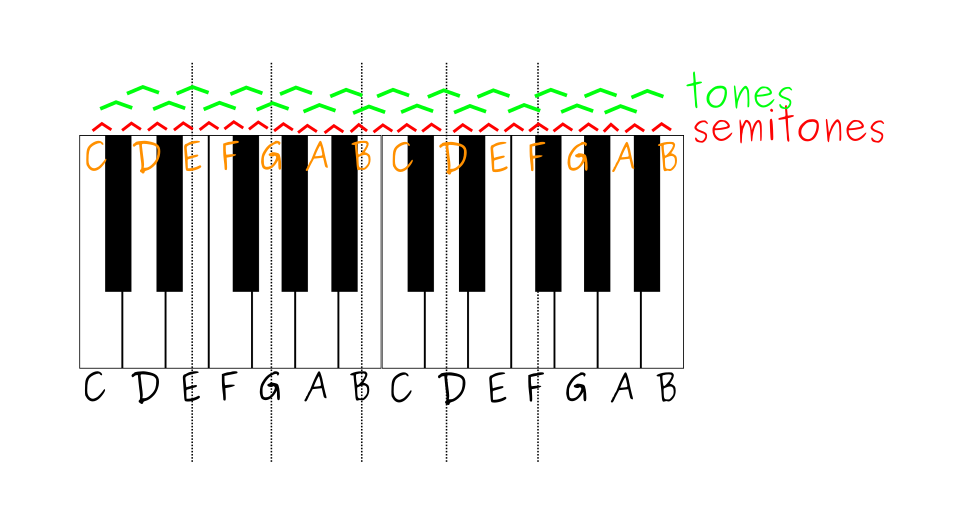 Let’s call one line or space in stave - a unit. We say that interval between two notes is “a second” if there are no units between them on the stave (i.e. this is a line and its adjacent space).

When there is one unit - “a third” ( i.e. two lines with one space in between or two spaces with one line).

Here comes a bit confusing part. F to G is a second. C to B is a second. There is a black key between F and G, but not between C & B. Nevertheless both are called - “a second”.

Scale - a pathway through octave.

Example - C Major (we just go through notes one by one)

C is called a tonic.

Sequence TTSTTTS defines “quality of scale”. This one belongs to Diatonic Scale (because it has 5 tones and 2 semitones).

There are different approaches in the world, this one is so called common practice, i.e. Western Europe 1600-1900.

If we take A as a tonic and again go through notes one by one, we get natural minor scale

i.e. the sequence of T’s and S’s is different from major This is still Diatonic Scale (still 5 T and 2 S). The sequence itself is called Aeolian mode.

When starting from D, we get Dorian mode

Basically we just traverse the stave starting from a note and write down all the notes we meet on our way.

G -> Mixolydian (also 5th degree of C Major, interval between C and G is a fifth).

We can do the same for C Major

One can construct a major triad by taking major third and perfect fifth (i.e. a note 4 semitones away and a note 7 semitones away). 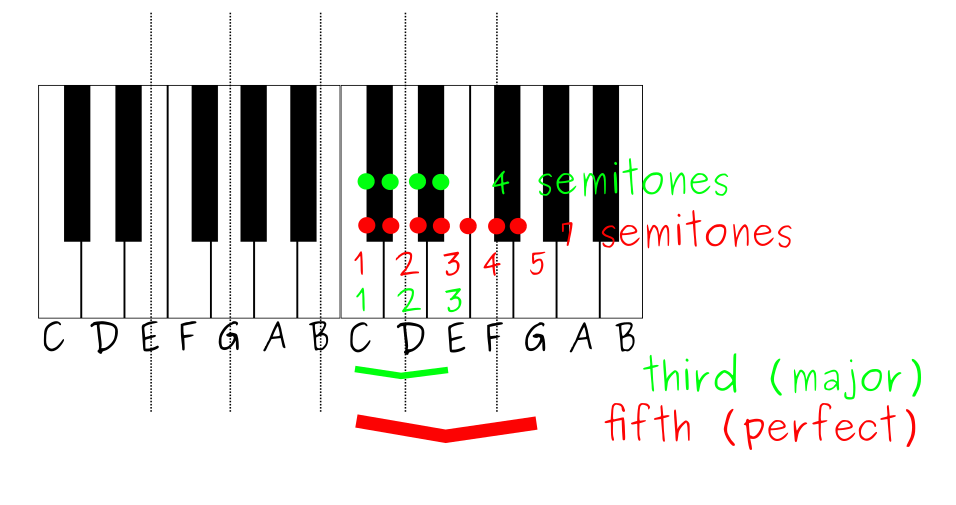 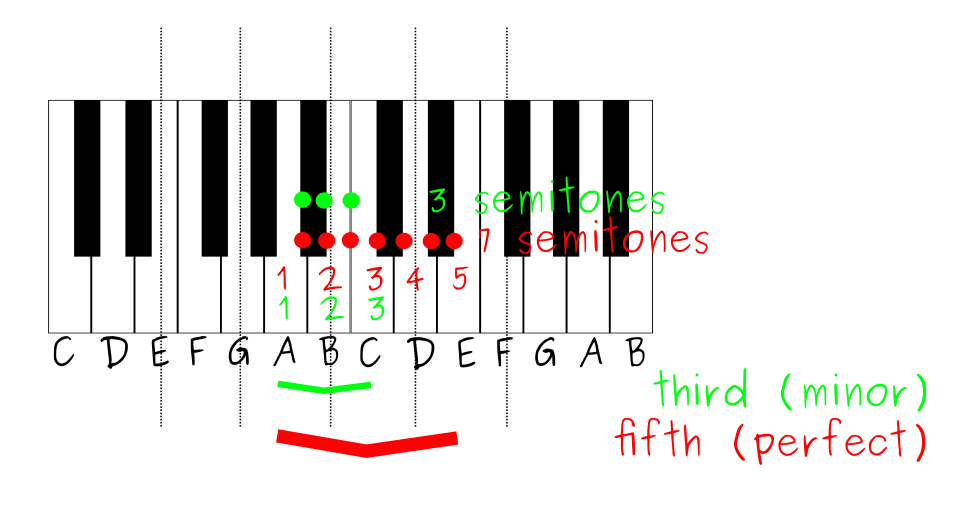 Note that “third” and “fifth” are taken from the stave, but whether it is “perfect”, “minor”, “diminished” is based on the underlying notes. I.e. we take C, count one stave unit, get E, count another stave unit - get G. Now we can count semitones and identify whether this is maj, min or dim.

If we repeat taking third and fifth from every note, we get:

You can harmonize notes with chords which have it.